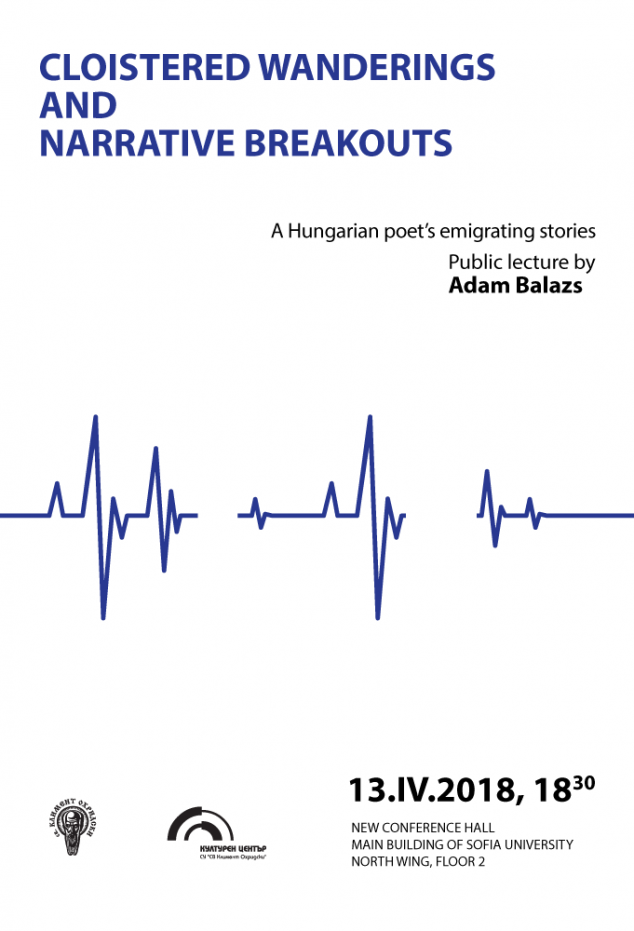 The Cultural Center of the Sofia University

The presentation will address the tight correlation between narration and emigration. Through an anecdote chosen in the Hungarian poet György Faludy’s autobiography, Adam Balazs will show how the fiction of a narrative self can help the émigré individual in avoiding the cloistered condition of exile.

Exile and emigration are distinct concepts, despite their recurring confusion in the concerned literature. Emigration is a geographical notion, it is a movement one can follow on the map. Emigration has starting points, the emigrant faces transit zones, crosses borders and eventually confronts the difficulties of expected or unforeseen destinations. This means emigration is a narrative category: it is possible to tell one’s journey, to relate the path of emigration in time and space through the events that have occurred during the trip. Emigration is more than akin to narration and storytelling.

Exile is almost an opposite experience. Though it is often described as a situation, i. e. a place in time, exile has become a genuine and harrowing human condition since World War I. Before the sanguinary overture of the European twentieth century, exile used to be an ‘exquisite punishment’ enjoyed solely by famous people, from Ovid to Victor Hugo (Said). One had to be a respected personality to be offered the privileged situation of the exile. In the twentieth century, exile became the shared burden of whole populations. If travelling, boredom (Baudelaire) and destitution might be considered as three core concepts of the nineteenth century, it is not before the turn of the century that poverty and ‘travelling’ get clearly interrelated. Certainly, the wandering movement of destitution was not completely unprecedented. Edward W. Said omits mentioning the massive Irish and Polish emigration throughout the nineteenth century and does not feel the need to recall the atrocious Atlantic experience deeply enrooted in Afro-American cultures.

The ‘end of journeys’ and the cruciality of narration

However, there is indeed a landmark in the early decades of the twentieth century: the ‘end of journeys’, as the French anthropologist Claude Lévi-Strauss names it (Lévi-Strauss). To put it plainly, the joyful experience travelling could constitute gave way to overcrowded, anonymous wandering. Lévi-Strauss, relating the almost unspeakable conditions of his flight from occupied Europe in 1940, regrets precisely the individual experience and the human dignity of his previous crossings of the Atlantic Ocean.

The intriguing point here is that Lévi-Strauss put this unbearable set of events into words and published, some 15 years later, the story of his desperate flight and wandering. In other words, narration plays a key role in the individual’s healing from the exile condition. Exile has definitely become a condition rather than a situation after the ‘end of journeys’ and the advent of exile as a massive phenomenon. Unlike Lévi-Strauss and other famous intellectuals who wrote about this modern form of exile (Theodor W. Adorno, Sándor Márai, Agota Kristof, Danilo Kiš, Marjane Satrapi), the average person who has managed to survive the dreadful conditions of flight often does not find the right words to describe, to tell what happened to him or her. The inability to relate the crossing of, for instance, the Mediterranean Sea is a perturbingly recurrent symptom in the most current international affairs. The lack of a narrative self, the impossible narration are major symptoms of the contemporary human condition. Europeans should remember much more clearly their own past experiences of this kind of narrative holdups to understand the condition of nowadays’ refugees – and Europe’s role in the sound management of the global migration issue. Europeans do know something about the fleeing person’s psychology but seem to hesitate in recognising this devilish, cloistered logicsof exile in non-European minds.

A scandalous Hungarian poet and his narrative self

In order to recall this European experience, to mobilise it in the hope of an improved European understanding of global issues, Adam Balazs will focus on the story of a Hungarian poet: György Faludy (1910-2006). To be more precise, he will concentrate on Faludy’s adventurous narrative self the reader gets to know throughout his abundant autobiographical prose. Contrasting with Lévi-Strauss, Faludy tends to exaggerate and practically reinvents past events. The interesting point is that the reader is aware of this: Faludy does not ‘lie’, for the painful reality remains accessible between the lines of My Happy Days in Hell (Faludy 1963). Imaginary situations, overstated dialogues and far too amplified thoughts are the very means for the narrative self to find his way through the cloistered condition of exile. To put it clearly, Faludy’s memories shape a series of acts, i. e. a flow of fiction, through which the narrative self can break out of exile and meet up again with the narrative paths of emigration. Like Lévi-Strauss and Said, Faludy was undoubtedly a major intellectual figure of the last century. A great and scandalous adventurer, like his well-known contemporary, Arthur Koestler. These émigrés are nonetheless the very exceptions confirming the rule: exile has become a widespread condition and the healing role of narration remains forbidden to the great majority of exiled people. However, the narrative means and tools provided by these famous intellectuals might help grasping exile as a contemporary condition. The autobiographic works of Faludy and others are available to unblock the European past and contribute to the constitution of a European understanding of global issues – through a specifically narrative dimension of European heritage.

Exile as a current form of cloistered wandering does not even need movement. There are disturbingly everyday forms of walls that refrain narration. For example to be stopped by the police five times a day because of dark complexion means to bump five times into the same wall and, at the end of the day, there is no story to tell anymore. I believe that having at least a story to tell is a matter of human dignity. Through a chosen anecdote in My Happy Days in Hell, I will highlight how common cloistered wandering is and how important it is nowadays to have a story to relate – and to be able to do so.

After studying classical philosophy, history and literature at Paris 1 – Panthéon-Sorbonne and political science at Central European University, Budapest, Adam Balazs (1982) defended a PhD thesis in political philosophy entitled The Exiled Mind: Cioran, Fejtő, Márai and Miłosz at Paris 7 – Denis-Diderot in Paris. Currently a postdoctoral fellow at the Political Science Department of the Sofia University St. Kliment ’Ohridski’, he teaches international students in English and French. His research focuses on the East-European experiences of exile and emigration in the twentieth century. He explores this topic to open constructive perspectives on the most contemporary challenges of migration, diversity and multiculturalism in Europe.