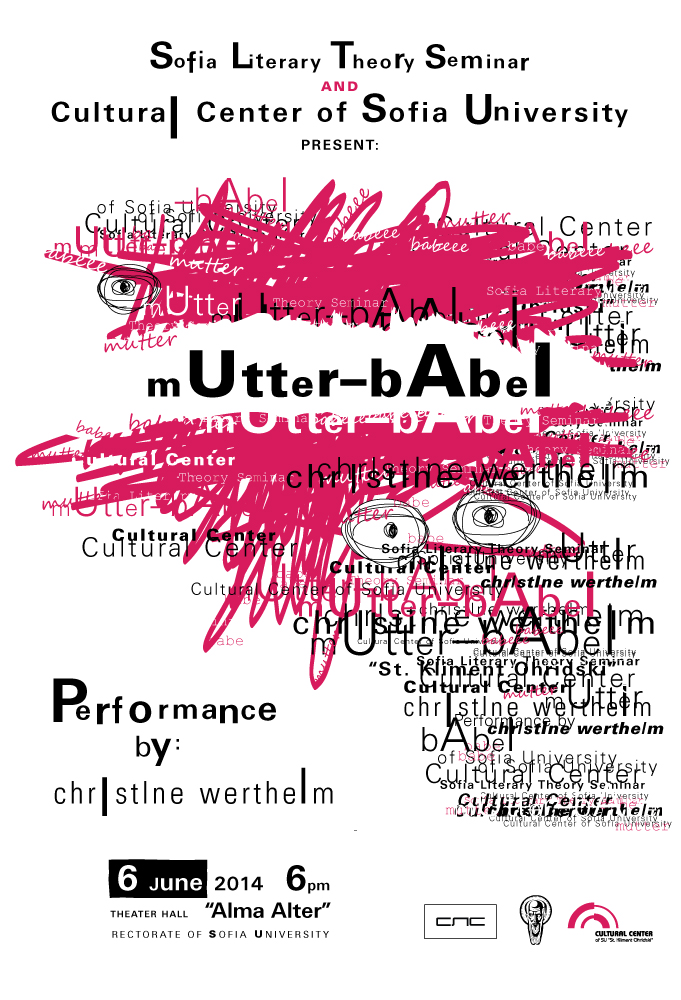 At 6th of June the “Sofia Literary Theory Seminar” will punctuate the end of the series of academic discussions during the spring term, by presenting the art performance „mUtter–bAbel” by Christine Wertheim – poet, performance artist and literary critic.

Christine Wertheim teaches at the California Institute of the Arts, yet lectures and performs internationally. She is in Sofia by invitation of “Sofia Literary Theory Seminar” to present her new poetic suite “mUtter–bAbel”. The performance of the same name which includes and portrays the content of the book will be preceded by a short presentation by Christine on her works and creative writing techniques.

Christine Wertheim’s performances include sound poems, puppet plays, and vocal tributes to Valie Export, Jean-Pierre Brisset and Samuel Beckett. In the „mUtter–bAbel” performance she will present sounds, howls and other vocal noises from her new book by the same title. The poetic suite is an exploration of baby’s thoughts about their mothers, and how unprocessed infantile feelings now leak into the adult realm, at local and global scales. The performance is accompanied by a slide show.

Christine Wertheim is a former painter with a PhD in literature and semiotics from Middlesex University, London. She is author of the poetics suites “mUtter-bAbe”l (Countertpath Press) and “+|’me’S-pace” (Les Figues Press), editor of the anthology “Feminaissance”, and with Matias Viegener co-editor of two anthologies of creative and critical literary writings – “Séance” and “The n/Oulipean Analects”. Her critical writing on art, literature and aesthetics has been widely published including in, Cabinet, X-tra, The Quick and the Dead, Issues in Contemporary Art, and Patarcitical Interogation Techniques, vol. 3. From 1995 – 2000 she taught in the Fine Art Department of Goldsmiths College, and at the Slade School of Fine Art. Since 2001 she has taught critical studies and creative writing at the California Institute of the Arts in Los Angeles. Most recently she had lectured and performed at La Sorbonne, Birkbeck College London, University of Western Sydney, Melbourne University, MLA Chicago, AWP Chicago, &Now Boulder, Poetics Research Bureau, and Automata, LA, amongst others.

With her sister Margaret, she co-directs the Institute For Figuring, organizing events at the intersection of science, art and pedagogy. In 2011 the sisters received the Theo Westenberger Grant for Outstanding Female Artists from the Autry National Center. 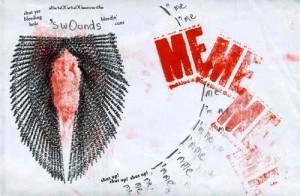