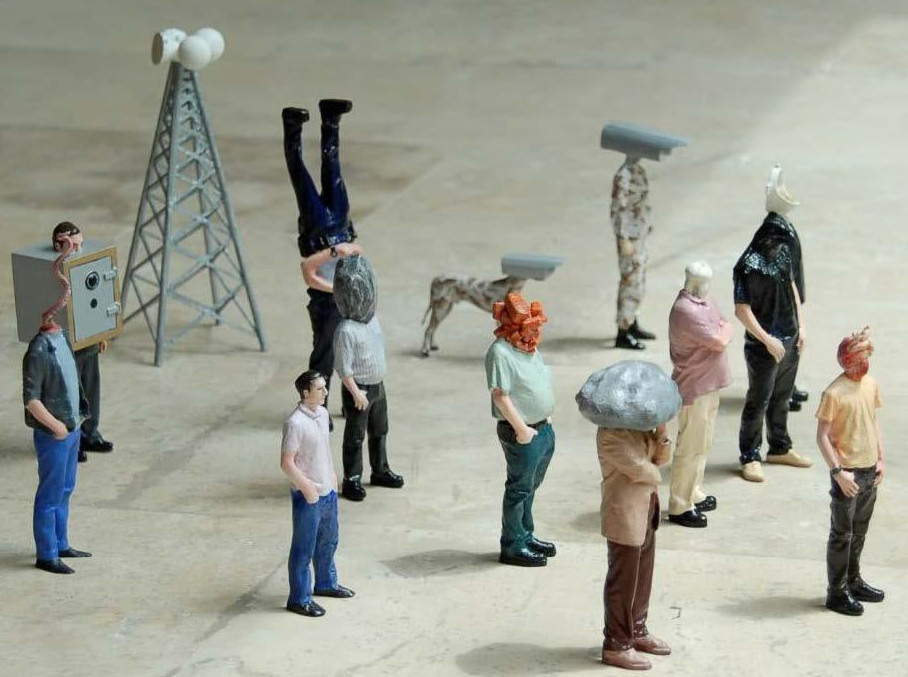 Imagine a number of 3D printed figures with a highly sophisticated finish brought together in a somewhat unusual or absurd fashion. Perfectly realistic bodies ‘matched’ with grotesque but equally realistic mismatches, e.g. heads made of an electric bulb, a rock, a camera, bricks, a urinal, a heart, a tooth, or even an octopus tentacle. And place these figures in a composition featuring a further unrealistic setting, which would always deny and even ridicule your first attempts to associate them with familiar events, spaces, relations, or people. The Typologies as created by Akkaya make you feel quite uncomfortable given your evident failure in mapping them in the real world as you conceive it or associate the same with a familiar artistic genre. They are cute, so to speak, yet potentially evil since they are strange and uncanny. 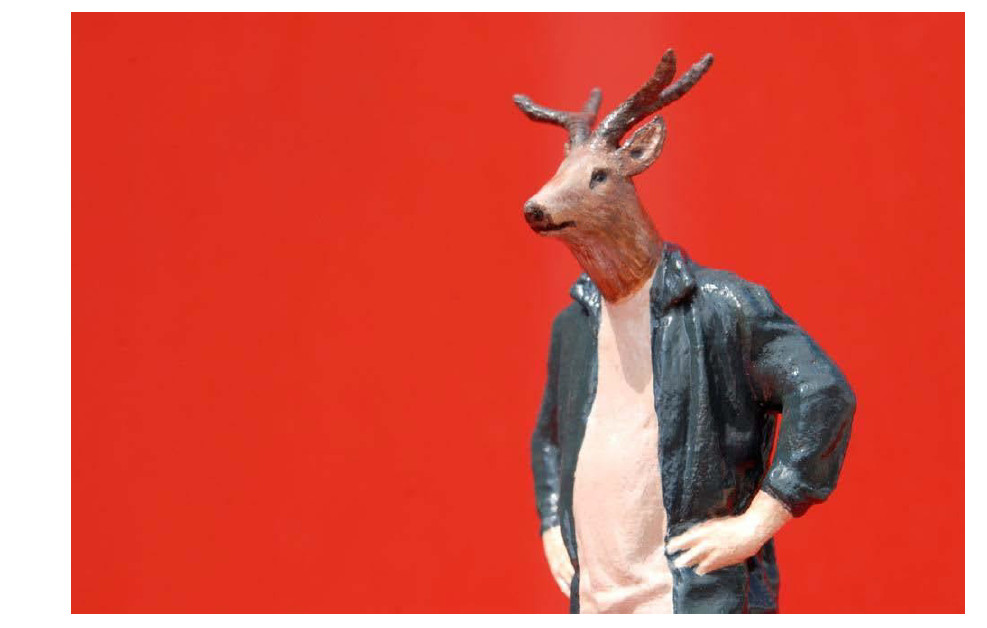 Technically Akkaya’s typologies and compositions are reproductions. They were generated, scaled, evolved, modified, perfected, distorted, and manipulated in the realm of digital art. Their sizes are similar to the fictional heroes and other staff usually accompanied the children’s menus at McDonalds. They are similar to the very toys we used to keep it under our pillows or desperately seek to trade in an attempt to extend our childhood collections: GI Joes, Transformers, Batman and Robin, Spider Man etc. However, things are little different with the Typologies.

First, the typologies are not heroes. They are absolutely ordinary people, animals, or objects. Secondly, they don’t have any literal typology, or any character assigned to them. They are seemingly arbitrary compositions of segments of reality. Only that those segments were meticulously detached from their original historical and social context beginning from the moment they were composed. Further, any possibility to link them with a familiar aesthetical grasp was carefully removed. Nevertheless, they are not aliens or fictitious creatures. They represent the unfamiliarity made out of familiarity. The arbitrary element excludes any possibility to come up with a permutation or combination algorithm to understand or recognize their type or associations, yet there always is the possibility of acquaintance. This is what encourages you to renew your attempts to associate and at the same time makes things difficult. It’s on the tip of your tongue, still, once you articulate it fades away. Thus they are not typologies of a familiar kind and any attempt will surely fail. 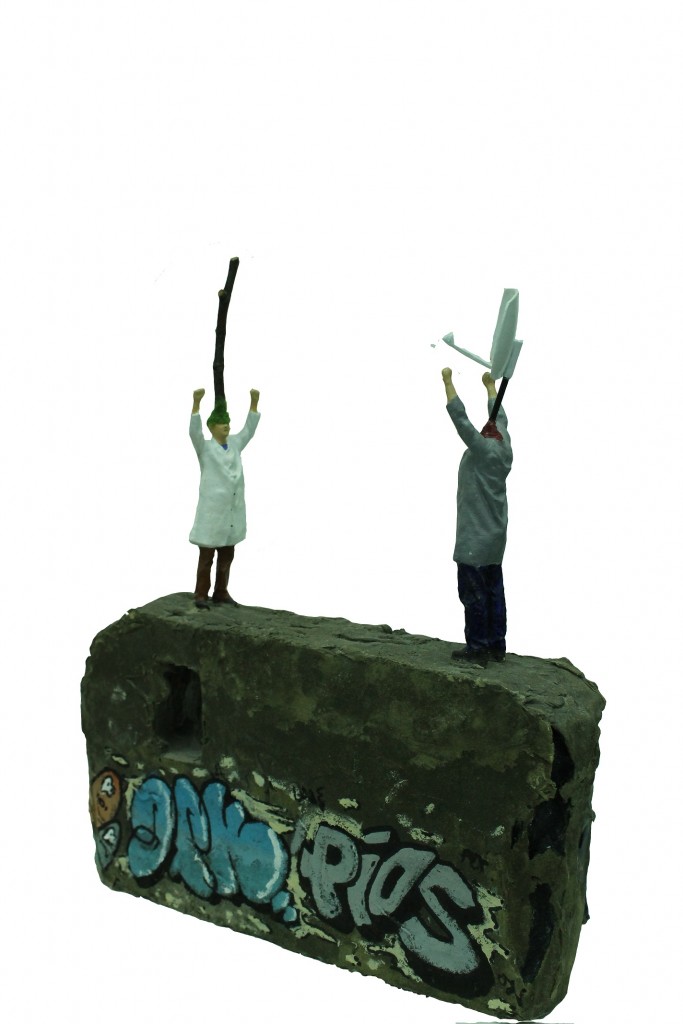 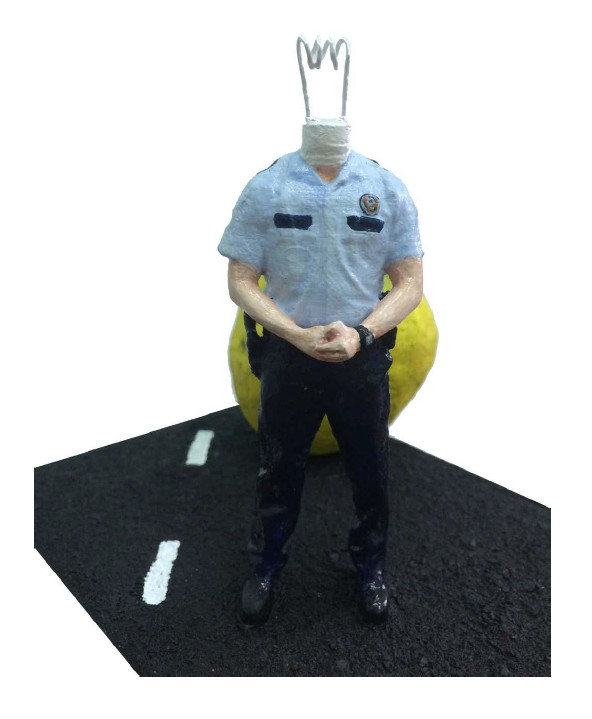 Typologies are perfect simulations of familiar typologies, where such stereotypes as a policeman, businessman, a watchdog, or a soldier (all having something to do with power, coercion, and suppression) were naively distorted with an attempt to defer quick and easy associations, especially with the political ones.

Say, the policeman with an electric bulb head might suggest his ideological identification and engagement with the current political power in Turkey. Yet due to the way Akkaya puts it in composition, this is not an option. He asks for a far deeper comprehensive attempt. Or, the cameras as fixed to a soldier -evidently American- and his loyal watchdog alter the meaning we expectedly attach to the American soldier icon. It is no more the ‘evil’ subject, thanks to the cameras. Dressed up with the ridiculous uniform the soldier and dog duo are the objects themselves, objects of war and objects of hegemonic desire. 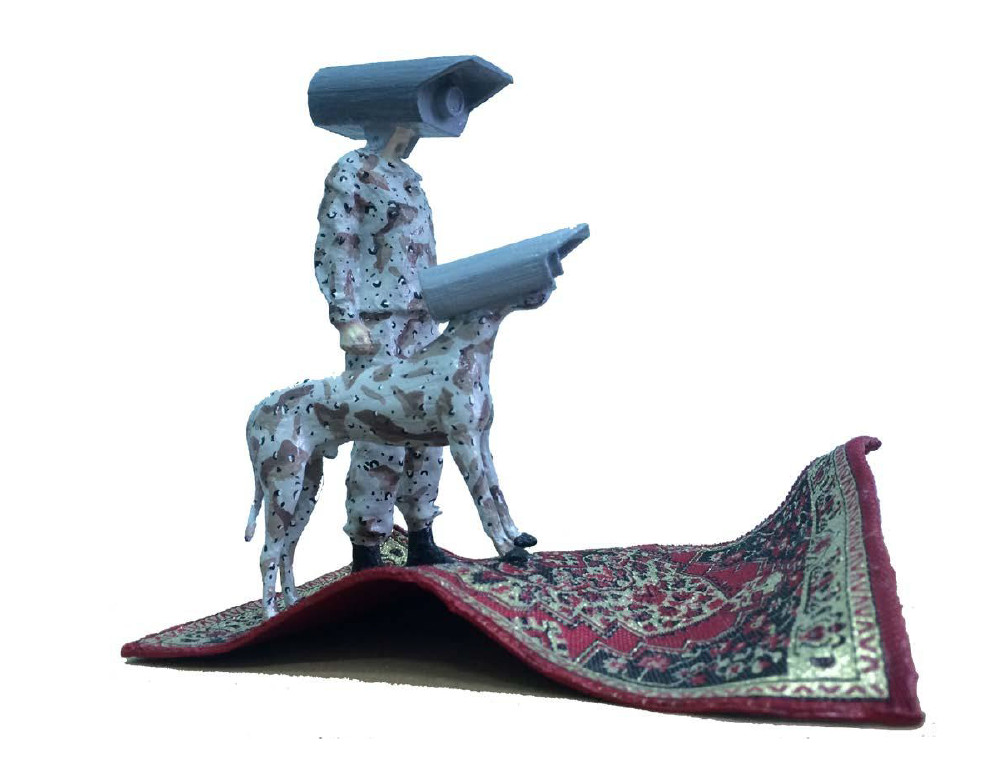 Typologies may suggest the future orientation of sculpture based on the postmodern art. As a matter of fact, the entire work perfectly destroys the contexts, distort familiar associations, deny metanarratives, and sublime the superficial and the arbitrary. Nevertheless, it may not be the case. Typologies suggest the fact that familiar typologies are also constructs, or arbitrary compositions. And by maintaining and simultaneously challenging the disturbing embodiment of political power, and its coercive tools via the arbitrary Typologies, Akkaya, unlike a postmodern artist, not only reminds us that we may be similar variations of such typologies, i.e. the constructs of such political power, but we also continuously rehearse and reproduce the same in ‘reality.’

Mustafa Akkaya, born in 1976, in Ankara, Turkey. Graduated from Sculpture Department, Faculty of Fine Arts of Hacettepe University. Completed his postgraduate studies in Social Sciences Institute at Mustafa Kemal University, and obtained Proficiency in Art at Mimar Sinan Fine Arts University. Having started his academic career in 2001, as a research assistant, he is now lecturing at Sculpture Department, Faculty of Fine Arts, Trakya University. Contributed in a number of national and international art activities. He has a number of sculptures in private collections at the country and at abroad.